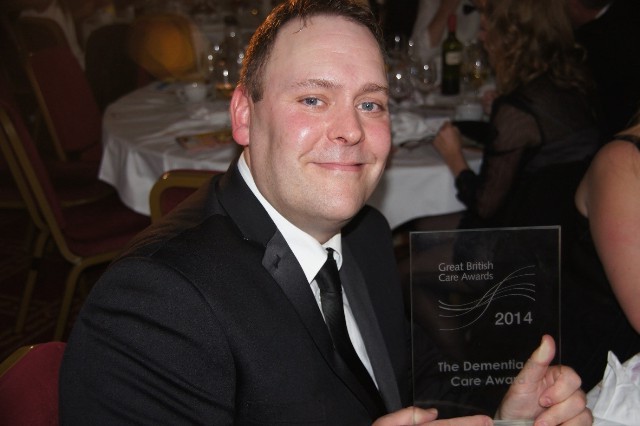 Congratulations to Robin Eddleston of Springhill Care Home who won a top award recently celebrating the best in the region’s care.

Robin won the Dementia Carer of the Year award at the North West heat of the Great British Care Awards, one of the industry’s top ceremonies.

We had a great night at the ceremony, held at the Palace Hotel in Manchester, and our colleagues from the Grafton Avenue team at Affinity Supporting People also won the Care Team award.

Along with the two wins for Robin and the Affinity team, four Springhill staff were also finalists – Jean Ali of Birch Green Care Home for the Good Nurse award, Sara Moss of Affinity for the Home Care Worker Award and both Ken Nolan, Springhill chairman and Donna Briggs, managing director, for the Care Employer of the Year award.

In total, forty of us from Affinity, Springhill Care Home and Birch Green Care Home attended, and Dom Dyer of the Grafton Avenue team had two reasons to celebrate – it was his birthday at the stroke of midnight, so celebrations continued.

Donna Briggs, Managing Director of Springhill Care Group, said: “Robin and the team at Affinity represent everything that is good about the care sector. They are hard working, passionate members of staff who put the people they care for and support first, and we are very lucky to have them as colleagues.

“We’re also really proud of our finalists – to even get to the finals of the Great British Care Awards is a great achievement as the competition was certainly fierce.”

Meanwhile, Jan Wilkins, general manager of Riversway Nursing Home in Bristol, also part of the Springhill Care Group, was recently named the Registered Manager of the Year at the South West heats of the same awards.